Haskell’s pure functional basis also lends it a high degree of abstraction and composability. Abstraction allows you to write shorter, more concise programs by factoring common, repeated structures into more generic code that can be reused. Haskell programs are built from separate, independent functions, kind of like LEGO®: the functions are bricks that can be assembled and reassembled.

Haskell is a widely used purely functional language. Here, we have listed down a few points that make this language so special over other conventional programming languages such as Java, C, C++, PHP, etc.

Functional Programming and Haskell
The main points are:
• Functional programming is based on expressions that include variables or constant values, expressions combined with other expressions, and functions.
• Functions have a head and a body and are those expressions that can be applied to arguments and reduced, or evaluated, to a result.
• Variables may be bound in the function declaration, and every time a bound variable shows up in a function, it has the same value.
• All functions take one argument and return one result.
• Functions are a mapping of a set of inputs to a set of outputs.
Given the same input, they always return the same result.
These things all apply to Haskell, as they do to any pure functional languages, because semantically Haskell is a lambda calculus.
Haskell is a typed lambda calculus — more on types later — with a lot of surface-level decoration sprinkled on top, to make it easier for humans to write, but the semantics of the core language are the same as the lambda calculus. That is, the meaning of Haskell programs is centered around evaluating expressions rather than executing instructions, although Haskell has a way to execute instructions, too.

What is Lambda Calculus?

Lambda calculus is a framework developed by Alonzo Church in 1930s to study computations with functions.

Where λx.E is called Lambda abstraction and E is known as λ-expressions.

Pure lambda calculus has no built-in functions. Let us evaluate the following expression −

We can reduce either one first. For example −

We need a reduction rule to handle λs

The formal parameter may be used several times −

When there are multiple terms, we can handle them as follows −

In an expression, each appearance of a variable is either "free" (to λ) or "bound" (to a λ).

β-reduction of (λx . E) y replaces every x that occurs free in E with y. For Example − 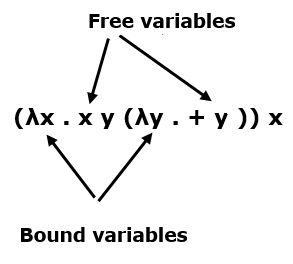 Alpha reduction is very simple and it can be done without changing the meaning of a lambda expression.